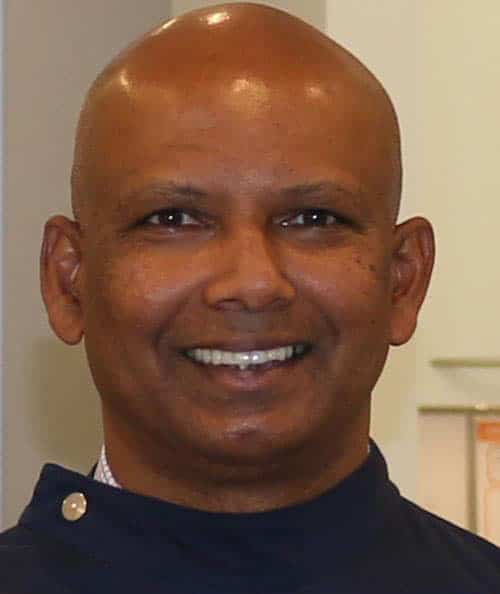 Dr Alex Warnakula graduated as a Bachelor of Dental surgery in 1997 from the University of Peradeniya Sri Lanka. Alex migrated to Australia in 2006 following completing the exam for overseas Dentist (ADC) in the same year. Alex has been continuously registered with the Australian Health Practitioner Regulation Agency (AHPRA) as a General Dentist since 2006 following successful completion of the ADC exam.
Alex has been working in North coast Area health services and Hunter New England Area Health Services in NSW before beginning to serve the Australian Defence Force as a Dentist in Canberra in 2008. Alex has been working as a Dentist in the Australian Defence Force since 2008 at Russell and Duntroon Dental clinics in the ACT.
Alex has worked at Evatt Dental Care and Kippax Dental Care in ACT for a short period.
Alex completed the RACDS secondary examinations in general dentistry with the electives Restorative Dentistry and Periodontology and, as a result, he has been admitted as a fellow into the Royal Australasian College of Dental Surgeons in 2015.
Alex enjoys all facets of general practice Dentistry, and he considers himself to have particular interest/expertise in Oral Surgery, Dental Implantology and Dental aspects of sleep medicine and appliances. He takes his professional responsibilities seriously and is a member of the Australian Dental Association. He is also a member of the Woden Dental Study group and Belconnen Dental Study group in the ACT.
Alex shows a keen interest in hiking and playing the guitar and follows AFL and state of origin Rugby.
Currently, Alex has been working as a Principal Dentist at Franklin Dental Care while he is serving the Australian Defence Force as a part-timer.